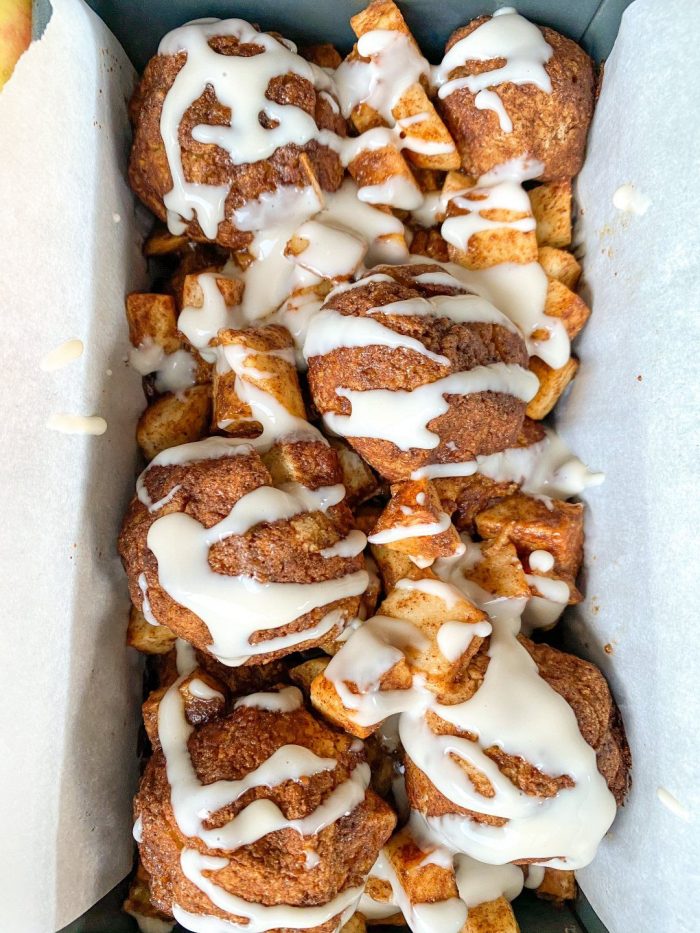 This Healthy Apple Cinnamon Monkey Bread recipe is just what the name says… EASY! No yeast or eggs are needed for this recipe. Plus these sticky cinnamon spheres are gluten-free, vegan, and made with all simple, wholesome ingredients.

If you were raised calling it Cinnamon Pull Apart Bread, there is no judgement here. No matter what you call it, this bread is still delicious. And this apple pie healthier version will steal your heart! I’ve already made this bread twice in one week if that gives you any indication for how good it tastes. It’s also a breeze to make! No dough rolling required (which I love)!

Making apple cinnamon monkey bread from scratch is not as difficult as you would think! Being completely honest right now… when I made my original gluten-free monkey bread, I nailed it first try, so I know you can nail it too! This recipe was a hit as soon as I pulled it out of the oven too. I had to ward my husband off so I could get pictures before he devoured it (and he’s skeptical about healthy baked goods so that’s saying a lot).

This apple cinnamon monkey bread would be perfect for any Holiday breakfast or brunch too! Think of it… you wake up Christmas morning to the warm smell of cinnamon and sugar, baking in your oven. You hop out of bed, pour yourself a tall mug of Superfood Hot Chocolate, and cozy up by the fire with your family as you all snack on sticky, gooey, monkey bread. I don’t think there’s a better way to start Christmas morning!

We use a simple list of pantry staples to make this monkey bread dough. The only flour you need is oat flour! If you have oats, then you can make oat flour at home in 3 simple steps!

How to Make Monkey Bread Vegan

This gluten-free monkey bread recipe is vegan because there are no eggs or even flax eggs needed. We also make a vegan buttermilk with plant based milk (read how below)! The only swap you’ll do to make this monkey bread vegan, is use coconut oil or vegan butter for dunking the monkey bread spheres in before rolling them in cinnamon sugar.

How to Make Vegan Buttermilk

Traditional monkey bread recipes call for buttermilk, which is high in fat and obviously not dairy-free or vegan. The reason this monkey bread recipe can be made with no yeast is by incorporating a vegan buttermilk. It’s the EASIEST thing you’ll ever make! (okay that’s a big claim. But, it’s really easy!)

THAT’S IT! Only, 1 step, and now you are a kitchen scientist! The acidic properties found in apple cider vinegar allow your baked goods to rise and soften with ease. And because we use plant based milk, it’s a vegan buttermilk! Simple. Easy. Fluffy monkey bread here we come.

Can I Make This Monkey Bread Ahead of Time and Bake It In The Morning?

Make-Ahead: You can make this monkey bread the night before and store it UNCOOKED in the refrigerator with cling wrap covering it. When ready to bake in the morning, remove it from the refrigerator and let it come to room temperature before baking as instructed.

I cannot wait for you to give this Easy Gluten-Free Monkey Bread a try! Please snap a picture and share it with me! Seeing your kitchen creations makes my day and encourages me to keep creating new recipes for you!

2. While the milk is sitting, line a 9x5 loaf pan with parchment paper or grease with coconut oil and preheat oven to 350 F. In a large bowl, mix together oat flour, salt and baking powder.

3. Make Cinnamon Coating: In a small/medium bowl, mix the cinnamon and coconut sugar until combined.

4. In another small bowl, melt the grass-fed butter.

5. In one more small bowl, combine the diced apples and tapioca flour. Then take 1 Tbs of the coconut sugar-cinnamon mixture and add it to the apples. Mix until combined.

6. After milk has congealed, mix in vanilla and maple syrup. Pour the milk mixture into the bowl with the oat flour and gently fold together until combined. Let dough sit for about 5 minutes to allow oat flour to absorb liquid (dough should be sticky, but able to be rolled into spheres with flour on your hands).

7. Generously flour your hands with oat flour. Push dough to one side of the bowl. Scoop out about 1 Tbs of dough and roll it between the palms of your hands until a sphere forms. Place the dough ball back into the bowl and continue to form dough spheres until you’ve used all the dough (this should make 23-25 monkey bread dough balls). Coat your hands in oat flour when needed (it’s okay if the dough balls stick together when placed back in the bowl on top of each other, they come apart easily).

8. Roll each sphere in the melted butter (shaking off any excess), then roll in cinnamon-sugar mixture until well coated. Place dough sphere in bottom of loaf pan. Once you have a layer of monkey bread on the bottom, pour over ¾ of apple cinnamon mixture. I did 5 rows of 3 spheres on the bottom layer of pan then 4 rows with 2 spheres on top layer. You can really do whatever though!) Cover with remaining apples. If desired, pour any leftover butter over the top of monkey bread.

Be sure to tag @secretlyhealthyhome on Instagram, Facebook or Pinterest with a picture of your gluten-free monkey bread! I love seeing your kitchen creations so please leave a comment and rate the recipe if you make it! It really helps support me and encourages me to keep making recipes for you!

Did you make this recipe?

Be sure to tag @secretlyhealthyhome on Instagram, Facebook or Pinterest with a picture of your recipe creation! Please leave a star rating and or comment! It really helps support me and encourages me to keep making recipes for you! 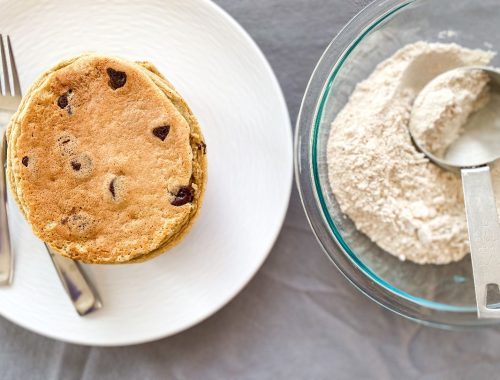 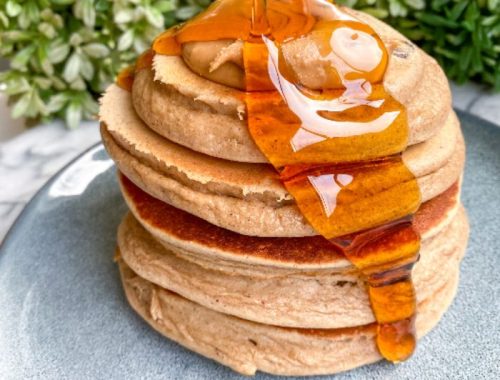 Easy Banana Protein Pancakes (Made In The Blender!) 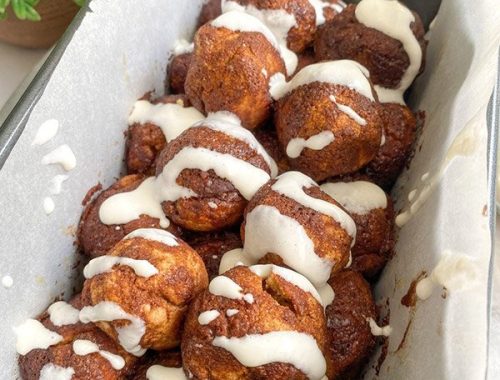 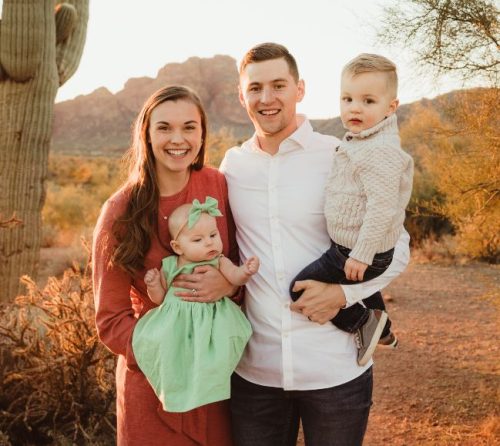 Hi friends, I'm Claire! My passion is to create secretly healthy recipes that taste amazing! I also love discovering tangible ways we can live everyday in the healthiest way possible. Can't wait for you to join the shh fam!
Love,

Full Disclosure: This website contains affiliate links. As an affiliate, I receive a small commission if you purchase through these links, at no extra cost to you. You can read my complete disclosure statement in my privacy policy. Thank you for supporting Shh!
Skip to Recipe